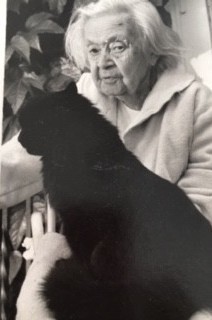 Who is the wisest person you have ever known? What did you learn from them?

The picture posted with this blog is called "The Porch of Wisdom".

The woman in this picture is my Grandmother, Helen Isabelle Gladwin (nee Browning). She was born on October 9, 1900. We always knew how old Grandma was, because it was the year we were in.

The picture was taken by a neighbour of hers at the time and he called it the "Porch of Wisdom". Grandma would have been 94 in this picture. She lived to be 97. By the time she was in her 90's, she was quite frail, but her mind was a sharp as a tack. Grandma always said that the people who were blessed were those that lost their mind in their old age, because they didn't know any different, but those who lost their physical strength were somehow tortured because they could no longer physically do what they once could, but mentally wanted to.

She would shuffle out of bed in the afternoon after her morning tea and breakfast in bed, and after doing her reading and writing of journals (for as long as she could). She would get herself outside to the porch chair on a sunny day and talk to people walking by or just sit and enjoy the sunshine. There was usually a cat on her lap. People would stop to talk to her and she always had a word to the wise.

Rarely would you find her dressed or her hair combed yet she was living life to the fullest as best she could and sharing her wisdom with whomever would listen. I listened. As a young woman I could have listened more, but the older she got and the older I got, the more I realized that she was worth listening to!

Helen was a career woman and, in those days, that was not popular nor was it the social norm. She was also a singer and a pianist. She sang with the Mendelssohn Choir and travelled with them. She was divorced (shock shock) in the 30's. She had 3 children and several careers and held to her convictions, when she would have been much more financially stable had she conformed to the world around her.

Grandma had a view of the world that was and still is uncommon. She looked for the best in everyone. EVERY, SINGLE ONE.

She was also a connector. Heard of the 6 degrees of separation? That theory that suggests there are only 6 degrees of relationship between any 2 people on the planet? Well, if you knew Grandma, there were likely fewer. She could connect any two people anyone ever heard of with someone she knew.

She spent her entire life trying to get up to 100 pounds. She was very petite. Small but mighty. I believe she managed to do it once for a few days. I wish I had that problem, (lol).

During her last few days of life, there was a parade of people from every generation of the family that were in to see her. It was a command performance. She asked us all questions about how we were doing with this and that and had to be sure that we were all ok before she moved on. She always told me that one day she would put her head on the pillow and wake up in heaven. That is exactly what she did.

Why am I telling you this story on a leadership, coaching and development blog? This is such an important story because if there is one thing that Grandma taught me, it was that there is sufficient God given wisdom (Universe given wisdom if you prefer) within each of us that we already know what the right answer is, what to do with any given situation or how to deal with our careers, teams, lifestyle choices etc. Grandma taught us that we were strong enough, smart enough, capable enough and wise enough. Full Stop.

Don't misunderstand me, there were plenty of people in my life who did not hold that same view, and who tried to drive the opposite into me. However, inherently I knew the truth and have spent years working hard to mine that same truth.

Don't stop here and wish you had someone like her in your life. You do. It's you! And me, if you are reading this blog!!

You have the strength and the wisdom that is more than enough for you. In fact, you have enough to share with others around you. That is why you are here. No man is an island the old song goes. It is truer today than ever. Social media, email and other technologies make it very easy for you to sequester yourself away in your office or workspace and "lead from a distance" or "lead virtually". I'm an old fashioned girl. I strongly believe in face to face relationships. I do love technology (when it works) and right now I'm falling in love with Zoom! Zoom let's you be face to face with people all over the world, really helping to bring teams together!

However, I digress....back to your wisdom. The power of mindfulness, meditation and other similar disciplines is that they do help you to tap into the strength and wisdom that you already have.

You are wise and strong. You have superpowers you haven't even tapped into yet. Be bold and brave enough to mine for them, share them and start to build that confidence muscle.

When Grandma passed on, I realized that my Mother had somehow taken over the wisdom chair. She has now also passed on. I'm working on my wisdom muscles. I'd love to talk to you about yours.

Learn how coaching & development can benefit you and your teams.
Book an Appointment